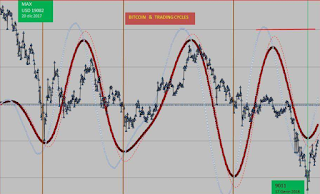 This time, rather than just, or maybe with, offer my own predictions to counter others as I had done before, I think an answer to the question 'why predict?' is in order. The role of predicting itself seemed passifying rather than activating.

In this sense I feel people are doing many different thinga beyond what can combine together, a Wolfram model for the universe. More than predicting I find myself hoping for a more critical thinking of social activities on social media. In this context I see the end of the artistic online presence.

This blog has been a longtime coming and I want to thank everyone who participated!


"now is the moment to learn hope" (john holloway) 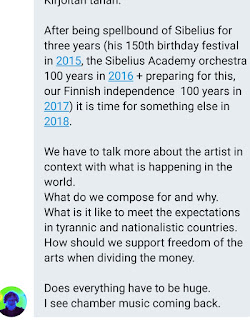 
One of the most exciting things happening within the music world at the moment is another fine blog series - Frances Magdelene Wilson's Meet The Artist. By turn it is growing into a 'Who's who' of Contemporary music. - the more people tthat do it -he better it will become. I was asked myself and that was just published. I want Oliver Knussen to do it - that. would be fabulous. [] I have have also been asked to make my 200 album Edition of works available for inclution in the Brtitish Library National collection of music - that was also quite a surprise - to say the least.. My all professional Group - now IF-DCM - will continue to document the personal contributions of it's members - highlight, feature and promote. One highlight of 2018 - will be my great friend Vito Palumbo's Violin concerto on DG. Have a 2018 everyone !look out for that.


This year music will be generated through a number of processes. It is still unclear whether this number is increasing. But it will be a lot of fun as the concert ritual certainly is evolving.

To love and care what we do.


2018 will see some radical changes in music distribution and licensing with the rise of decentralized blockchain technology.


Some recent trends in instrumental and electronic music have tended to a quietness, a stillness in expression; use of more artisinale home-made style retro set-ups; grappling for authenticity, a purity and simplicity, in line with such aesthetics/labels as another timbre.

Not a prediction, more a wish, that 2018 ushers in less of the cerebral. More sonic richness, diversity in expression; speaking a voice more of the heart, maybe from a more libidinal perspective. Less conceptual, more feral. An advent in individualism; starkly distinctive and brave voices staking out new territories (begun already in places); a continued sifting down across musical genres.

splintering continues under the weight of the capitalist foot...


I would like to hear more passion and emotion in contemporary music in 2018, less mechanical approach. the world is such a crazy place, will get crazier every second, and music should reflect this - by imitating or contradicting the global emotional state of mind.
for me, the gap will widen between music with statement and music without statement, the latter with a more snapchat-ish perspective.
this goes for composition, interpretation, and improvisation of contemporary music: don't forget about affects and emotions, love and anger, and everything besides and in-between.


2018 will be a decent year for music. Some albums will suck, others will be very, very good. A few dozens musicians beloved by a substantial section of anyone's Facebook feed will pass away, generating quickly dissipating waves of grief and irony. A bunch of popular news articles will hail the beginning of "AI music" after the commercial success of a pop song entirely composed through neural networks, but nobody will actually like the song. There will be at least one "best record of all time" released this year. No major genres will emerge out of nowhere, but some will gather enough hype to appear as the defining genres of 2018. No one will care in 2019 anyway. Electronic music will still be the major site of both overproduction and innovation. Experimental musicians will still cover their Apple logos with pieces of black tape and play shitty drones sets with Ableton patches, MIDI controllers, contact microphones and Tibetan bells. While metal will remain dead, extremely cheesy power metal records will experience a short-lived renaissance given their connection to a TV series or videogame. There will be a feud between Thom Yorke and Dwayne "The Rock" Johnson stirred by their agents for the promotion of an upcoming featuring.


A Russian computer super-virus deletes autotune plugins in DAWs worldwide, and pop stars need to learn how to sing again


Prediction: Niche market music will gather more momentum. This will in turn highlight 'functional' music; that is, music written or received for spiritual works, political endeavors, specific cultural concerns and so on.


Hi Timo! I predict that CD with new, old and any kind of music will disappear soon and we will enjoy watching 3D-recordings of concerts at home!


I believe that music will continue to expand and will finally overcome the boundaries of what we think music is. so at last composers will stop to compose or decompose and will start to hear and listen (and let people hear and listen).

Music is a step closer to the orange.


As Facebook will become even more boring, Soundcloud even more commercial, and Bandcamp not really community oriented, I will still have a hard time finding new public and ways to pay my bills. I think that old school technologies like phpBB forums and mailing lists will be a new emergent way for new music people to reach other humans beings. And blogs too!


If I had a real hope, musically speaking, we would discard the culturally biased musicology we have inherited, and began to accept what is plentifully available (e.g., untemperament rather than the non-natural equalness we have inherited, and is hegemonic, still). I hope the terms "conconance" and "dissonance" are reviewed and reapproached. etc.
And bassoons become known to the general population. but no predictions, only hopes


2018 will see more austerity measures, some intentional and som e a by-product, made to stop grassroots and community art works. The tireless selfishness of the government and councils will not only ensure they have work and artists don't, but that their children and the future generations will not have a deeper or authentic engagement with art in their youth. 2018 will see artists who want to see change come forward and no longer insist but actually make the changes that need to happen themselves.

Sequentially:
*Incubation of sublimated yearning for the exquisite
**Therapeutically motivated stacking up of unedited reams ***Broaching the precipice of corrective annihilation.


I salute the upcoming year 2018 as a vital substrata for diverse and fleshly new sonic vibrations, as well as for the fluid and allowing discussions on sound, listening, sensing through sound and knowing through sound. I salute the corpucopia of new meanings for sonic understanding; the blossoming epistemology of acoustic-ecological sensitivity, the intertwining plies of intimacy of sound, and the shocking variety of the socio-material penetrative force of sound. The fragment that we call ”music” may or may not glimmer sometimes somewhere there, between the waves and bits and sweat drops.


Prediction: Positive: more and more work of a further diversified community will continue to expand as continued awareness of the imbalances grows as well as further awareness and consequence to harassment within disparate music communities. I also personally hope for - and this is not so much a prediction as a wish - a step away from the prevalence of personalities at the expense of a broader expanse of output that maintains the best work being done today. Negative: The emphasis on reviews and lists will sadly continue - as opposed to continued recommendations and commendations that are not based on trips around the sun. This seems to be a modern day problem and I wonder when the first "best of" lists were made, whomever came up with the idea ought to have been put in the stocks.


The sale of recorded music will continue to fade, streaming will rise, it will become impossible to sell recorded music so musicians must figure out a new way to present and package our recordings... who knows what this will be? Listeners may develop new levels of sophistication in connecting one piece of music to another, there may emerge new senses of relationship between sounds...
Or.... we may continue to take all this endlessly flowing music for granted, and value it less and less....


Some people will truly - listen - in every way they can.


I predict that Scott Dakota's Archagall tunings, which approximate a pentad or pentatonic scale such as 1/1-75/64-85/64-128/85-30/17-(2/1) as a kind of "rational tempering" of a simpler septimal tuning such as 12:14:16:18:21:(24), will lead to some fascinating possibilities with 17-note well-temperaments based on this idea. These 17-note circulating systems, as variations on George Secor's 17-WT of 1978 (40th anniversary coming up soon!), should open new possibilities for beginners and experienced users of alternative tunings alike.

(good luck with that)
There has been some concern in the past few years (mostly from the shrinking and mostly irrelevant antidisestablishmentarian wing) about the trend to defend, nay nourish, musical illiteracy in higher education by those who wish to research and teach and, especially, publish in  the most recent musicology-du-jour, musicologie sans viande (the rightful heir descended from 'new' and at times 'critical' musicology with rapidly multiplying subdisciplines in what is collectively known as 'anything-but-the-notes studies'). Musicologie sans viande illiteracy now dominates the scene as students (who now are in charge of the asylum define the curriculum) rush to enroll in a course of note-free music studies that will eventually lead either to a ditto career in academia or to a profitable real world career such as professional turntablist or professional video costume designer and thus satisfy both their own pubescent dreams and their parents' demands to 'get a job or join the Navy I don't care just get out of the house'. But while that is(unarguably you will agree) the current state of affairs in the down-home elites' academic-industrial music complex, there is a concomitant trend in music's 'real world' (a.k.a. music's niche-market complex a.k.a. the paying audience), to wit, a dramatic increase in musical aliteracy which is the state of having putatively healthy functioning ears transmitting to a putatively healthy functioning brain but being uninterested in or antagonistic toward hearing the slightest hint of anything that challenges or intereferes with the pre-recorded (see Morris Massey) soundtrack for the exciting autobiopic constantly looping in every pomohead. The North American branch of Académie de Musique sans Viande (AMS-V) claimed to have been the first to define and develop aliterate theory and dubbed it musique safespace. This slap at their language so enraged the French that .... What was the question?

Helmut Lachenmann will finish his long-awaited Trumpwave Concerto. It is a masterpiece of critical music, profoundly questioning the listening habits of contemporary hypermediated humankind, but this aspect is lost on both much of the New Music audience, who consider its innovative instrumental writing and its strange referentiality "very interesting", as well as on the kids of the alt-right, who just find it half-assed.

Posted by acutethics at 3:53 AM